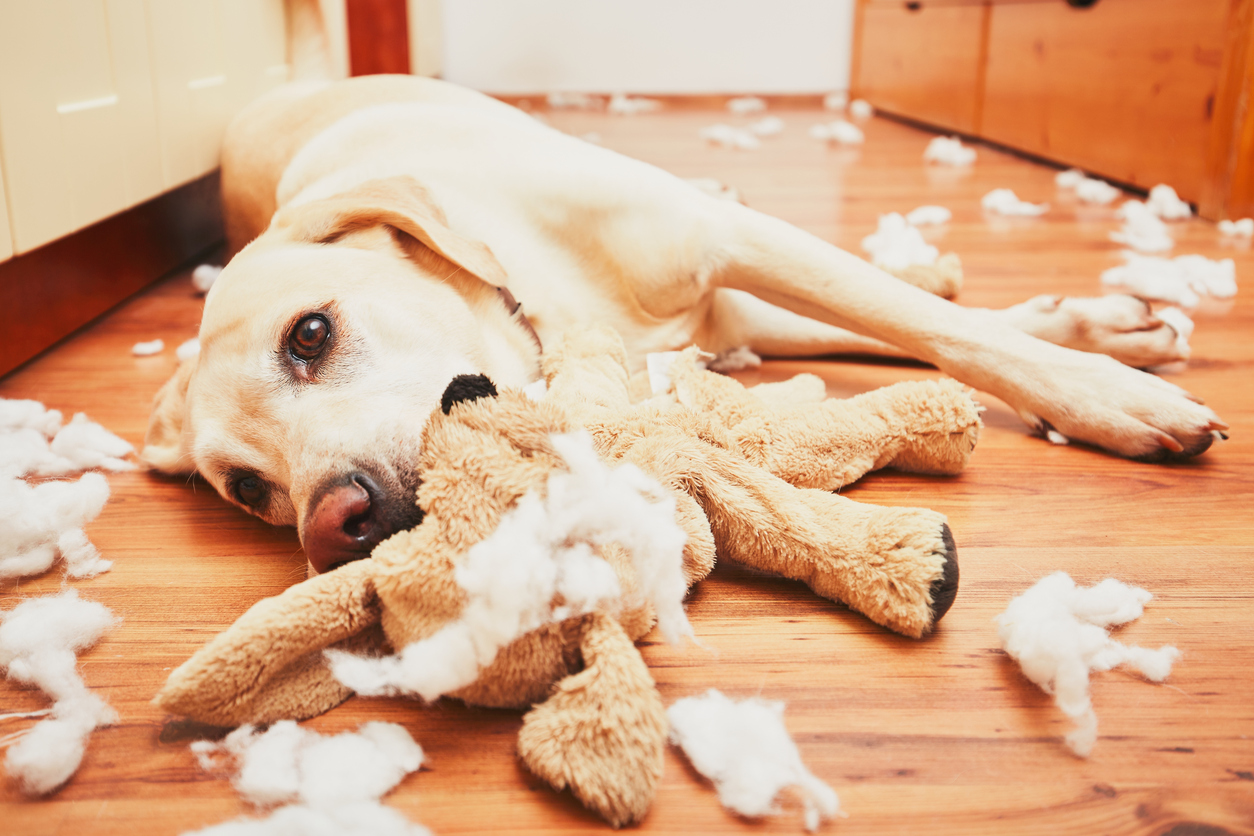 Dogs. These days, it seems like man’s best friend is an even better friend to the retail outlets. If you can think of a dog accessory or toy, it’s out there, and often at a whopping price tag. I sometimes scratch my head in the aisles of Pet Smart and PetCo, thinking “Really, $8 for a tennis ball and a white cord? Wow, you really can get money for old rope!”

So I looked around for ideas that I could make at home quickly, easily, and without spending more than a couple of bucks on any one toy. Ideally I was looking for toys I could make without having to buy anything. And as my big pooch doesn’t know the difference between brand new and homemade, all I really had to do was make sure she liked playing with them.

It’s worth noting that although socks and jeans are mentioned in here, it’s best not to use ones that have been worn already. You don’t want to associate your scent with something the dog is allowed to chew, or you could be in for a world of ravaged clothing and shoes. Socks can be picked up very cheap, as can jeans, from your local Goodwill or second-hand store. If you must use an old sock or piece of old clothing, try soaking it in something that will eliminate any smells.

Anyway, here are the winners, in no particular order.

Place the ball inside the sock to the toe-end, and then tie a knot just above the ball to seal it inside. Probably the cheapest, easiest, and handiest DIY pet toy you can make.

Drill or cut a hole in each side of the ball, big enough for your piece of rope to squeeze through. Put the rope through it until the ball is central, and tie knots either side of the ball to keep it in place. Tie knots at the ends of the rope for grip. You now have a killer tug-of-war toy that is also good for fetch and chewing.

Take your old, gnarly kitchen towels and put them to good use. Cut two slits along the length of a towel, equidistant from each other, and stop cutting about an inch from the top. Then braid the towel as you would hair. Knot the loose ends and you have a tough dog rope toy that’s way cheaper than the ones in the stores.

For a tougher toy, or for bigger dogs, braid three complete towels together and tie the ends or sew them up. NOTE: Old jeans can be used to make an even hardier braid.

Don’t buy one of those expensive dog toys that look like a Build-a-Bear before it got stuffed. Just take an old stuffed toy (one that your kid doesn’t want any more, or buy one for pennies at Goodwill) and remove all the stuffing. Then sew it back up. My dog loves her unstuffed raccoon. She’s had it for years.

Tie a knot in the center of the fabric. Then a knot around that one. And repeat the process until you have one giant knot. Cut off the excess from the ends, and roll it for your dog for hours of chewing madness.

Option: When you’re done, soak the knot in water (or beef stock if you’re feeling generous) and put it in the freezer. If your dog’s like mine, chewing at the ice will make it extra fun.

Remove the plastic cap and throw it away. Put a dozen or so treats inside and then give it to the dog. Your pooch will bite and scratch and throw around that bottle until the last treat has fallen out, which could take hours.

This one is easy-peasy. Take a section of garden hose and put a 3-inch long piece of branch in one end. It must fit very snugly. Curve the hose around and put the open end over the exposed piece of branch. You now have a great throwing hoop.

Other garden hose options include tying a sheet of nylon around the hoop to create a flying disc, and simply knotting a piece of hose. The video below shows you more.

Another very simple but effective toy. First, take the cap off of your plastic bottle and throw it away (it’s a choking hazard) Now squeeze all of the air out. Put this inside of an old sock and tie a knot in the end of the sock to keep it in place. The sound of the crackling plastic, and the texture, will be something your pup will go nuts for.

Flatten one end of the cardboard roll and seal it up with duct tape. Pour some of your dog’s favorite treats inside. Flatten the other end and seal it up. Now wrap the whole thing in duct tape for strength. Your dog will love the rattling sound and try for ages to get the treats out.

If you don’t want to use treats, or have none available, simply flatten the tube and wrap it all in duct tape. This makes a good alternative to those rawhide chews.